Welcome to the squat

What can I do?
The more people inside the house the better. There are many things that need to be done, especially in the early phase of building up a communal space. For example:
– painting banners (bring paints, brushes and fabrics)
– make some music for a nice atmosphere
– tell all your friends to join
– don’t take any pictures. You don’t know if people are ok with it. And it helps the police to get information.

You don’t want to go inside?

There are also many possibilities to be supportive from the outside
– be there and raise awareness to what’s happening (the police is often not as violent as when nobody is watching)
– form chains to protect the building
– make music and be loud
– organize solidarity demonstrations (and take part)
– make some food, bring some cake

Squats seen from a legal point of view
“Do I make myself liable to prosecution if I go into the building or help constructing something?”
A squat is seen as trespassing; the owner is seen as being affected; There’s a possibility of criminal damage to property. There will be legal proceedings if the owner reports it, but it can also happen if there is a so-called big public interest.
“So I got it right, that the squatters can have a lot of legal problems if the decision makers want to beat them up.”
That’s right. That’s why we don’t talk to cops, take pictures or film. That means, that entering the house can endanger the status of people with precarious residence permit.

What happens when the police comes?
If you are in an action it is wise to not talk to cops, even though there is no reproach against you. If the police show up, stay calm, talk to the people around you how you want to react. And remember: never talk to the cops!

Giving personal data
The police are allowed to ask for your personal data. You have to give them only your name, the address you are registered with, your marital status, nationality and your general job title (e.g. employee).
Some people decide to not give their identities, the consequences can be, for example, longer detention, the taking of fingerprints etc. So inform yourself beforehand about the risks.

What should I take with me when squatting?
Yes!
– ID-Card
– phone number of the EA
– pen & paper
– water and snacks
– first aid kit

The police took my name, what should I do now?
Better talk with your friends before an action about possible consequences and strategies. After the police contact you should definitely start thinking about the next steps. Here are some good ideas to start with:
– write a memory log
– contact the local anti-repression group (more information below)
– talk with the other involved people about next steps

I’ve got a letter, what should I do?
When cops record your personal data, mostly it takes a long time till you hear from them again.
Usually it is a letter saying that you should come to the police station to be examined. In that case you should not say anything, you can only make it worse for yourself and others. The better way forward is to take the letter and go to an anti-repression group, they will help you.
Sometimes they directly send a penalty order. They try to declare you guilty without a court hearing. You should appeal immediately, it’s enough to do it via an informal letter within a week.
And of course go to the anti repression group!
If you get a letter or the police are stood in front of your door, never forget that you are not alone.
Repression is supposed to separate us and make us feel defenseless. It can be helpful to talk about it.
Remember: solidarity is our weapon!

If cats could talk to cops they wouldn’t! 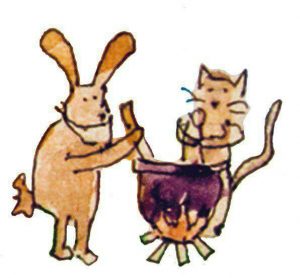